Crysoberyll must not be confused with beryl. Crysoberyll occur both as a transparent, semi-transparent and sometimes opalish with multiple colors.It is a rare mineral consisting of crystallized beryllium alluminat. The name comes from the Greek words for golden and crystal. Chrysos and beullos.They are hard and very durable, usually clean, without too many inclusions and very suitable for use in jewelry. The colors can vary from greenish to golden brown, which is the most coveted.

Mineralogen Adolf Erik Nordenskiöld gave the stone the name "alexandrit" in honor of the Russian Tsar Alexander II because the first alexandrit were found in Russia on his birthday. Specifically, in an area of the emerald mines in the Ural Mountains in 1831. Because this stone comes from Russia, it is also an interesting coincidence that the country's national colors are just red and green.Some of the finest stones are still found in the Ural mountains and there are also those with the greatest historical value. It is found stones for grinding is over 30 carats. Other finds places are Sri Lanka, Brazil, Zimbabwe and Madagascar.

Alexandrit is a very rare and expensive stones that change color from pale yellow to pale yellow-green or yellowish-brown in daylight. Alexandrit from the Ural Mountains in Russia are green in daylight and ruby red in artificial light (alexandrit power). Other stones may be yellowish or pink in daylight and raspberry red in incandescent.The ideal color change is from emerald green to purple, but this is very rare. Because the stone is so rare and has ability to change color, it is ideal alexandrit among the world's most expensive gems.Extra fine examples of 3 - 5 carats can reach over $ 300,000 .- Regardless of size, this is a rare stone. A ring with large purple stone that changes color is most likely a synthetic krysoberyll or synthetic corundum with color shifts.If you want to know more about KRYSOBERYLL and ALEXADRIT (what is the difference, etc.) you can read more: http://www.ajsgems.com/Chrysoberyl.htm

… Ground always as cabochon to display the stone special optical effects: an almost white, silk-like line with a characteristic blue opalesence across the stone called chatoyance or catseye effect. Other stones can also show this effect - such as tourmaline, quartz and beryl, but only krysoberyll catseye described as only "catseye". The stone is widely used in men's jewelry.

The color can vary from pale yellow to honey and amber. Some stones are almost apple green. The most valuable and rare is the honey brown, and they clearly show two colors with a skyggeefekt. So-called milk and honey effect. D.v.s. When a bright light directed at the stone so the one side of the eye is milky white while the other remains amber. When you turn on the stone as changing the colors page.The strength of the eye is also helping to determine the price per carat. The most valuable specimens of kattøye so far found in Sri Lanka and Brazil.It should be able to cure asthma and eye diseases and otherwise secure the owner a good sleep and suppress all the bad dreams. 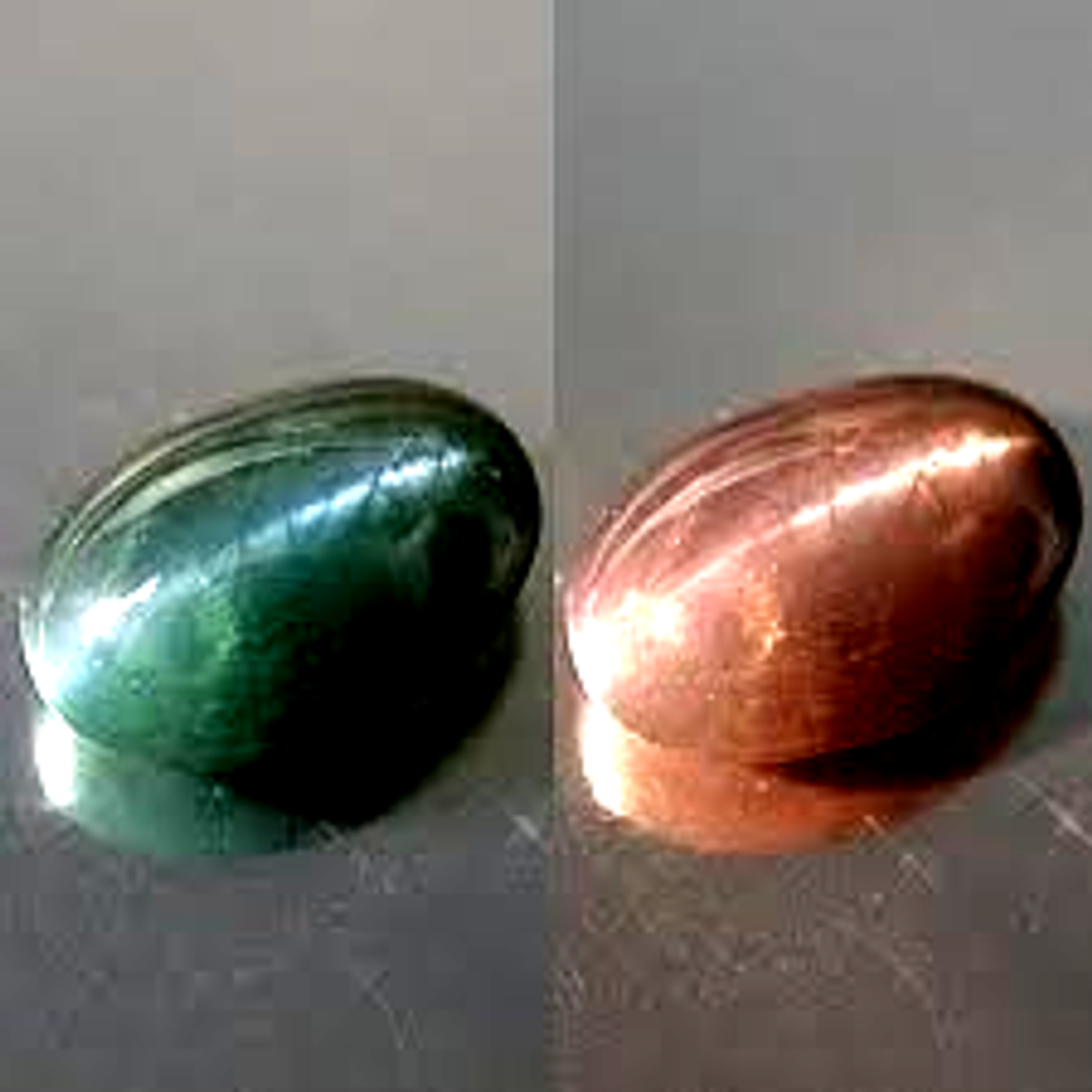